The first thing that comes to mind when thinking about rowing is the prep school crew team rather than a hardcore workout. Generally, most people don’t have an idea about what to do on a rower. They just sit on the rower and row without knowing the correct technique. People do find rowing difficult and tedious. However, this is not because rowing is tedious but because of the mistakes they make when using rowing machines.

Tips to use a Rowing Machine

There are certain mistakes and techniques which, if ignored, can make rowing tedious and tiring instead of a refreshing workout. The most common one is bending the knees before arms get extended fully on the return. Rowing is a chain reaction and one incorrect form can be a cause for the other.

Check out the following tips to use the rowing machine right way.

Before beginning with rowing, it is important to nail the rowing form properly. This can, however, be tricky. This can be a little tricky. The key steps are: 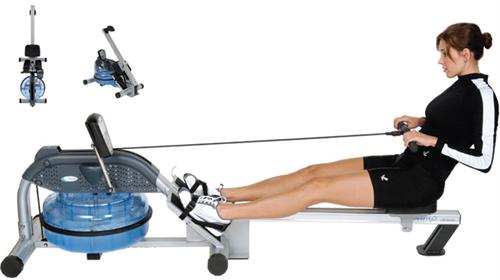 Besides the rowing position, it is also important to take some precautions during the workouts. Check out the following precautionary tips when using a rowing machine.

Remember, you can always adjust the rowing machine, also referred as an erg, to increase the level of resistance. Generally, machines are set to a scale ranging from one to ten.  The best rowing machine scale to set for effective workout ranges between 2 and 5.

Another important point to remember is that powerful strokes begin with legs and not biceps. Just think about rowing as a horizontal dead lift. Sit tall with arms extended. Further, hinge the torso forward to an angle equivalent to 11 o’clock position while you slide the seat forward. Then, while pushing back, let your knees fully straighten before rocking the torso back to one o’clock position, pulling the handle towards your abs.

Most importantly, it is crucial to know on how to decode the monitor. The split time indicates the speed or the time that would be taken to row 500 meters. The strokes per minute, mentioned as spm is a measure of your power. For efficient strokes, make an effort to stay between 20 and 30 spm.

Besides the correct position and precautionary tips, it is also important to wear a formfitting clothes, else you might risk the fabric getting caught in the machine during workout. Also, there are different ways to measure the workout levels. Therefore, change the display button on your machine to “track your strokes per minute”, kilometers travelled, the split (time taken to travel 500 meters), or calories burned.

So, get set and crank up the calorie burn while simultaneously stretching and strengthening your muscles with just 45 minutes workout on a rowing machine. Get yourself a rowing machine and you will never regret it!