The E-type is an icon of the Swinging Sixties, and it isn’t difficult to see why. Sensational looks, the ability to reach close to 150mph (241km/h), and all for half the price of an Aston or a Ferrari: Jaguar’s sports car was an instant sensation.

Its curvaceous good looks – equally good in roadster and fixed-head forms -were clearly related to the Le Mans-winning D-types of the 1950s, sculpted by aerodynamicist Malcolm Sayer. Its structure was similar too, with a monocoque central tub and a tubular front section carrying the engine and front wheels -though the exotic aluminium and magnesium alloys of the D-type were replaced by steel. The E-type’s engine was also shared with previous models, a 3.8-litre development of the fine straight-six XK unit with a claimed 265bhp. Wishbones and torsion bars provided independent suspension at the front, and the rear was also independently suspended by lower wishbones, fixed-length driveshafts and twin coil spring/damper units. 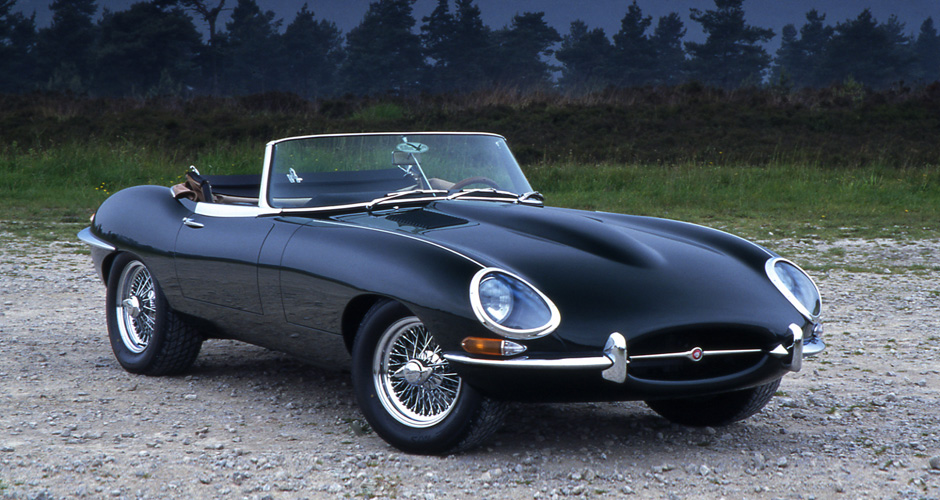 Jaguar claimed a top speed of 150mph (241km/h), which road tests subsequently proved – though the test cars had been carefully prepared and, in truth, production cars fell slightly short of the mark. Although production E-types weren’t quite as quick, they were still as rapid as almost any competitor and much cheaper than most. The model soon became a regular in sports car racing, and Jaguar built a short run of lightweight E-types which are now highly prized.

A better gearbox and a torquier, 4.2-litre engine were introduced in 1964, and a two-plus-two coupe” followed in 1966. Nine inches longer than the two-seater and an inch and a half taller, the two-plus-two was oddly proportioned – giving it an ungainly appearance.

Numerous small changes were implemented in what became known as the ‘Series One and a Half’, including a change to open, sealed beam headlamps, before the Series II proper was unveiled in 1968. The headlamps had been moved forward slightly and bigger indicators fitted, and the air intake had been enlarged to admit cooling air for the new optional air conditioning. Inside rocker switches replaced protruding toggle switches.

By the end of the 1960s increasingly stringent emissions rules in the US meant that a ‘Federal’ E-type produced just 177bhp. More power was a priority, and it came from a brand new V12 engine designed by Walter Hassan and Harry Mundy. In American specification the V12 offered a genuine 250bhp, despite lacking the fuel injection system originally planned – instead it was fuelled by a quartet of Zenith Stromberg carbs, and sparked by Lucas Opus electronic ignition. The V12 Series III E-type of 1971 used the longer wheelbase of the old two-plus-two car, with flared wheel arches, wider wheels and a new flush grille.

In the US the Huffaker Engineering and Group 44’s Bob Tullius built successful racing machines based on Series III E-types, but even so the basic design was being overtaken by more modern rivals. The final E-types were sold in 1975. Jaguar never directly replaced the model, instead introducing a more refined and luxurious GT car, the XJ-S.

Thanks to its stunning looks and still-impressive performance, the E-type is a favourite among classic car enthusiasts the world over.